Learn about Desert Winds Freedom Band Activities for Season 21 below

On November 19, 2021 the Desert Winds Freedom Band performed their Fall Concert 'California Dreamin' to a near sell-out crowd at the Richards Center in Palm Springs.  The Concert Band included over 100 musicians for this concert of music all about California.  The Jazz Band performed California Themed music as well,  with assistance from vocalists Keisha D and Charles Herrera.  Complementing the music were some amazing videos created by James Ditchfield and the Palm Springs Aerial Tramway  showing  scenes from the Coachella Valley and surrounding natural areas projected on a large screen behind the band. 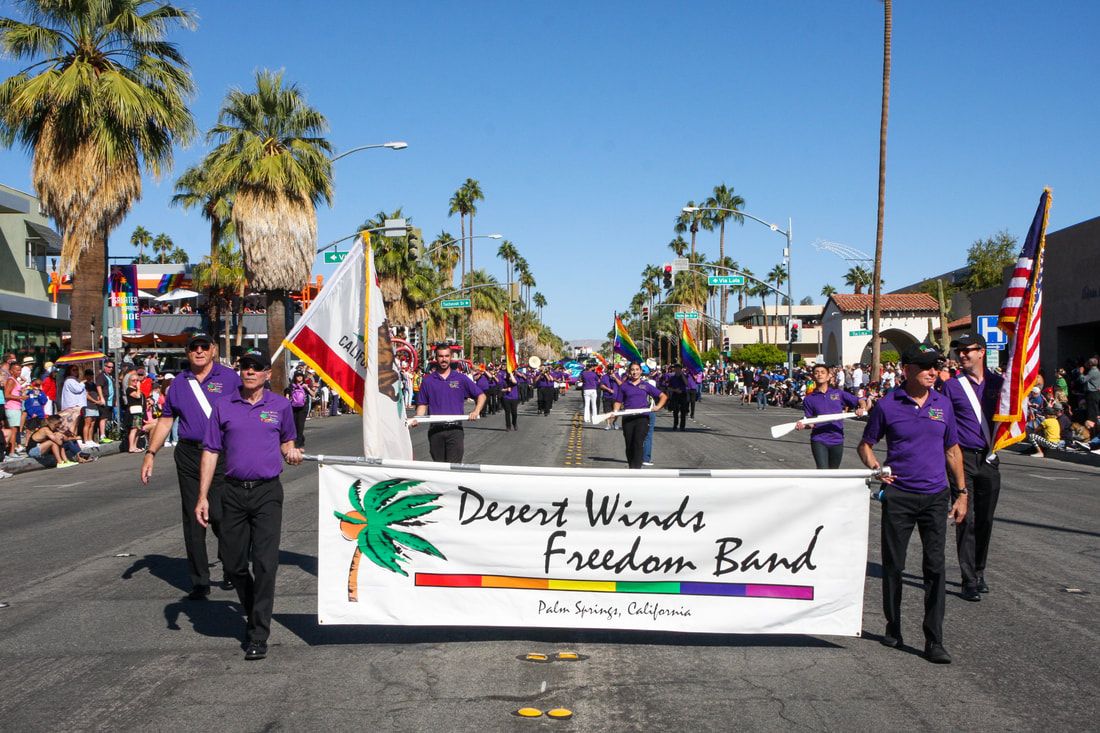 The Desert Winds Freedom Band joined hundreds of other marchers on Sunday, November 6 for this year's Pride Parade.  The band fielded an impressive contingent  including our musicians, color guard with flags and rifles and a twirler!  There are more pics from the parade below!
(Thanks to Band friend Fran Potaski for the great photos)

Desert Winds May Concert of Pop and Jewish Music

On May 1st, the Band performed a free afternoon concert of Pop music and Jewish music jointly sponsored with Temple Isaiah.  The music was well received by the audience which filled the auditorium.  Afterwards, band members mingled with the audience for light refreshments.

The Band performed an evening and a matinee performance of our 20th Anniversary Spring Concert at Temple Isaiah on March 26th and 27th to a nearly sold out house.  Artistic Director Dean McDowell led the Symphonic Band and the Jazz Ensemble in music appropriate to the concert theme 'Infinite Hope'.  Guest Composer/Conductor Brian Balmages conducted two of his works, and Band Founder Gary Moline conducted a march.  Helping the Band celebrate it's 20th Anniversary Season, members from some of the men's choruses performed with the Band for the concerts closing number.  A highlight of the concert was the premier performance of the work  'Ascent from Darkness', commissioned by the Band and composed by Band member Rosano Galante.  The Band awarded five music scholarships to local High School seniors at this year's concert.  Please check out some Concert photos below!